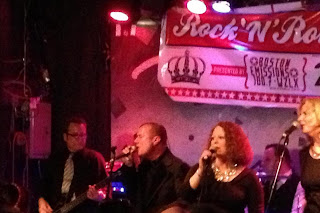 There was a moment toward the end of Eddie Japan’s set at the Rock And Roll Rumble finale Friday when frontman David Santos introduced “Fight Song” in a manner which pretty much spot on summed up the rollercoaster ride of this year’s annual celebration of Boston area music. “It’s about sticking together,” he said of the soon-to-be-recorded track, “which is what we’ve done for the last month.”

Santos easily could have been talking about his sprawling, baroque-inspired ensemble, or he might have been referencing the cluster of bands that began to duke it out for the Rumble crown on the first Sunday in April. But what he said no doubt encapsulated what our city has made abundantly clear in these past few weeks. “We are Boston,” the (once more) “Mystery-Shot”-fueled revelers at T.T. the Bear’s Place chanted in unison as the champagne was sprayed on Santos and his crew when Eddie Japan was announced the winner; it was another display of unity in what has always been sort of a warm and fuzzy fest despite its competitive moniker.

Anyone who caught even one Rumble night with Eddie Japan on the bill can tell you they were the outfit to beat. With a sound that would fit squarely in any Tarantino flick (“A Town Called Nowhere”) and a sharp-dressed Santos’ moving like Mozzer, they routinely pulled out all the stops. From a pair of female backup singers that were having just as much fun onstage as those in attendance (infectiously so on “This Married Life”) to the final song introduction of a string section to Chris Barrett constantly slaying on trumpet, few had a chance.

That’s not to say there weren’t worthy challengers. Twin Berlin came through the back door as a wildcard for the second time in this year’s Rumble. There was a good degree of buzz that the rooted in Connecticut alt(ish)/punk(ish) rockers would pull the upset of all upsets -– especially after a Monday night semifinals jaw dropper that ended with singer Matt Lopez sprawled out on T.T.’s beer soaked floor with his baby blue guitar exhaustively resting on his chest. There would be none of that Friday, as for the most part the band played it straight, once more silencing those comparisons to the Strokes with an energy that Julian Casablancas and Co. are typically too bored and detached to muster. This is an act that is still in the midst of an upward trajectory; one that shows no signs of wavering.

Glen Yoder & The Western States were slightly reminiscent of last year’s Rumble winner, Bow Thayer & Perfect Trainwreck. Not so much in down home boot-stomping manner (though there definitely was some of that), nor that they both rock what is these days the underutilized ampersand, but more the way that they had the audience in the palm of their hands with the sonic ebbs and flows. There was some languid guitar soloing on “Not the Man For You,” a song which had jarring bursts of instrumentation that were met with eruptive cheers at each turn. Yeah, there was a good deal of that Neil Young vibe going on, and there were also more raucous Americana moments, like the very Wilco-esque “Just Want You To Love Me.” Yoder looked like he was having a blast, and at the end didn’t seem like they were close to being finished -- all the more reason to catch him at the Lizard Lounge at the end of the month.

While the judges were deliberating or hitting up the photo booth or enjoying the triumph of yet another year pulling off what often looks impossible, 1985 Rumble veterans The Dogmatics busted out of the Wayback Machine to show the upstarts how it’s done. Touted as special guests for the evening, the Dorchester natives played garage-tinged rockabilly like they had nothing to lose -– which of course they didn’t, fitting right in with the genre blendering that the annual event is renowned.

In the end, it wasn’t a shock that Eddie Japan won the whole thing and landed that damn fine booty which includes loads of studio time, professional photography and even hours of free legal advice, but what shone the brightest this year was the spirit of Boston. No, not that overpriced tourist trap on the Harbor, but the strength and backbone that has gotten us through these recent times of trouble. The music scene here is just one tiny faction of what makes this city tick; it’s loud, it’s bratty, and it gives a shit about one another. And while Eddie Japan took the Rock And Rumble 2013, we all took it to another level in pushing through and marching on.

Posted by Michael Marotta at 7:34 PM