It's a dreary rainy Friday here in Boston, a perfect setting for Philadelphia's Cold Cave to make its Boston debut. Record deals with Matador, comparisons to New Order, song-placement in a Radio Shack ad -- it all adds up to one highly-anticipated pill show. This will be white-hot madness. From the pill boston dot com: 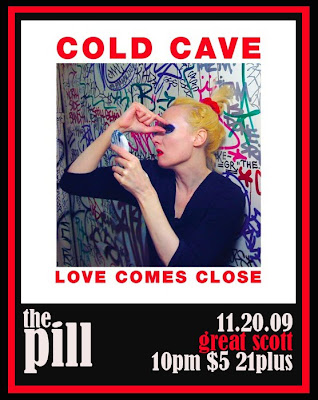 Just before a two-night stand performing with Sonic Youth in New York and Boston, Philadelphia’s Cold Cave swings by the pill this Friday to distort our modern indie stage and send a relentless synth-shock across the dance floor. Featuring Wes Eisold of recent hardcore luminaries American Nightmare and Some Girls, Cold Cave has rocketed to the forefront of modern electro movement, enlisting Prurient’s Dominick Fernow and Caralee McElroy formerly of Xiu Xiu to create an unsettling world of noise-pop that’s crafted so meticulously, one track (“Life Magazine”) has found its way to a Radio Shack commercial. Several other songs from Cold Cave’s sterling Matador Records debut, including title track “Love Comes Close” and “Youth And Lust,” have coated the pill’s dance soundtrack in a darkened neon glow. Said Pitchfork in August: “That mixture of postpunk unease and fluid bleep would've made Cold Cave fit right in on the early-80s Factory Records roster alongside Section 25 or the Durutti Column.” It’s a fascinating collection of sounds that has the potential to captivate and cast dance spells. This union of Cold Cave and the pill has been in the works since July, so we hope you’ll join us for one of our most anticipated live shows in quite some time. Don’t sleep on this.

Get acclimated with Cold Cave over at myspace.com/coldcave, with a heavy recommendation toward the glistening crypt-pop romp of “Love Comes Close.” and as always, before and after the band DJs Ken & Michael V spin the best in Britpop, Modern Indie & Beyond. Look sharp.