Incredible show Wednesday at Great Scott, and I might not even be hungover by then. Here are the deets and some evidence, along with my blurb from last week's GS mailer. Dragonette are fucking awesome, and the Clash -- I mean Televandals, well, you know how they roll. 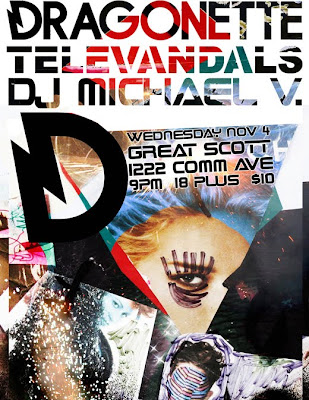 The recent wave of female-fronted electro pop is overwhelming, but of mostly a singular presentation. Solo projects from Little Boots and Ladyhawke have fired up the dance floor, but none come as full-band-onslaught quite like Toronto's Dragonette. Led by Martina Sorbara (who I really would love to make out with but probably won't be able to because she's married to the bassist), Dragonette continue the synthpop revivals in a sea of off-the-shoulder glittery mist and neon eyeball confetti (I'll take "forced music journalism terms" for $100, Alex). "Pick Up The Phone" is a new wave dance with a soul, and Dragonette's strobe light twirl with Martin Solveig is a must-hear. Meanwhile, Televandals bring their own color shade of grit, high off the release of the EPIC music video "Good For Nothing" and their rendition of the Clash at tomorrow's pill Halloween Show. I, DJ Michael V, keep the beat alive before/between/after the bands with my usual Friday night mix of dirty disco and sharp modern indie electro, and it should be a fierce time all around.

Posted by Michael Marotta at 8:27 AM