Repost from my Hotline blog: When Ian McCullough cried out "Spare us the Cutter" last month at Great Scott, who knew he was singing about the IRS?

Less than two weeks before it was slated to kick off in Atlanta, Echo & the Bunnymen have canceled all eight dates on their upcoming North American tour due to a taxation issue, making last month’s intimate gig in Allston all the more special – as well as detrimental. 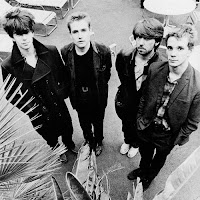 According to online reports by LimeWire and Spinner UK, there’s a law in place that states that foreign bands must pay a certain amount of fees to tour the United States more than once in a 30-day period. And since Echo and Co. recently performed a series of small-scale club dates last month, including Great Scott in Allston and the Mercury Lounge in New York, they decided to scrap the tour instead of forking over wads of cash to Uncle Sam. Talk about a Killing Moon.

Echo & the Bunnymen stated on their website that the cancellation, which included a Nov. 23 show at the House of Blues, was “due to unreasonable demands… presented by the IRS for the band to enter the USA to tour.” How did their management not know about this?

While the news is a bit of a bummer for those who got shut out of the Great Scott gig, Echo & the Bunnymen plan to reschedule the tour, starting with a handful of East Coast dates in April to promote new album “The Fountain.”

Perhaps the kiss-of-death here was opening act Hatcham Social, who were supposed to hit Boston earlier this year with the Charlatans UK, until that tour was nixed after the Charlatans drummer broke his arm.

Live Nation stated this morning that refunds are available at point of purchase.
Posted by Michael Marotta at 10:10 AM