From today's Boston Herald, where I report that things are looking good -- and British -- along Newbury Street. Very exciting stuff...

The British are coming, but this time they’re bringing good news. And men’s designer fashions. 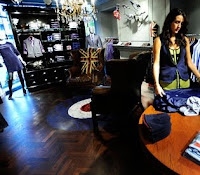 The two stores, along with the arrival of other new-look retailers, represent hope along Newbury Street and suggest Boston’s poshest shopping strip is on the mend after a recession-induced downturn.

“No doubt there was a dip,” said Joyce Hampers, president of the Newbury Street League. “We were all nervous for a while, but now we’re seeing all kinds of activity. There’s something going on here.”

The shops and boutiques that are reshaping Newbury Street’s aesthetic run the gamut of style: home guru Jonathan Adler’s new outpost at 127 Newbury; designer jean retailer and pop-up store 7 For All Mankind at 160; street wear destination BLVD at 251; hipster haven American Apparel at 138; and fashionista den Pinkyotto at 156.

But it’s Ben Sherman and Ted Baker that are throwing down the tailored gauntlet.

“They’ve done their research,” Hampers said. “This says this is the place to be.”

Ben Sherman’s sleek designs go hand-in-hand with the style mind-set of those riding Vespa scooters around Back Bay.

“There was always an intention to expand into Boston,” said Dana Dynamite, Ben Sherman vice president of entertainment. “It’s a natural progression for our brand. We wanted a real street location and feel it’s a perfect fit.”

The moody Newbury Street store will be a model for future Sherman shops, Dynamite said. It’s not a far cry, design-wise, from the “Mods in the Mansion” decor of the flagship London shop on Carnaby Street or a recently launched Berlin location. 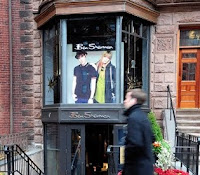 If Ben Sherman is catering to the fashion-conscious 20-something, Ted Baker has its sights set on the more-seasoned male.

“(Boston) has been on our key location list for quite some time,” said Craig Smith, Ted Baker’s director of brand communications. “Newbury Street is extremely well-regarded for international brands and if you are thinking of coming to Boston you will invariably have to look at Newbury Street as a serious contender. Class is permanent, as they say.”

Can men’s fashion flourish on what is a predominately female-centric shopping strip?

“Men have been getting braver for the last few years,” Smith said. “And as long as brands like Ted Baker continue to make really interesting and engaging product that consumers are interested in, then the industry will go from strength to strength.”

- mmarotta@bostonherald.com
Posted by Michael Marotta at 8:37 AM