Repost from Hotline, off my blog column over at bostonherald.com: I’ll be the first to admit I’m not the biggest Neil Diamond fan, and any suggestion he should be in the Rock and Roll Hall of Fame is met with a shrug of indifference (you know, in the same way a suggestion that any band should be inducted into something as ridiculous as the Rock and Roll Hall of Fame). 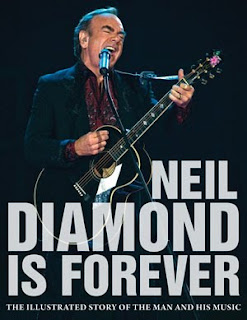 But over the weekend I was shaking my bits to the disco hits down at Videodrome, and then it happened – Mr. Diamond hovered over the crowd on the giant projector screen, his 1986 semi-hit “Headed For the Future” synced up perfectly from the DJ booth to the big screen above, and in unison everyone at the bar joined in for a little Neil-worship. I gave in, but partly because I knew my request for Bertie Higgins would soon follow… but it was a moment. Many glasses were raised. Some even dropped to their knees (not out of the ordinary for a Saturday night in Allston, but I digress.)

So it’s a bit timely this note comes streaking across the Hotline desk. Jon Bream has authored a new book, “Neil Diamond Is Forever: The Illustrated History of The Man and His Music,” and it helps make a case for Diamond’s induction to the RnR Hall. Bream will be signing copies – and certainly educating us all – at the Borders Back Bay on Boylston Street this Monday at 5 p.m. Here’s the presser, with some of Bream’s thoughts on immortalizing the man, the myth, the legend – Neil Diamond:

From Bream: “The elitist club that runs the Rock and Roll Hall of Fame doesn’t think Neil Diamond is hip enough to even be considered for induction. I say put him on the ballot and let the voters decide.

“His credentials are more impressive and compelling than those of many inductees. He has written hits for the Monkees, Smash Mouth and many others as well as for himself. He’s scored 12 top 10 singles in the ‘60s ‘70s and ‘80s. In this decade, he has worked with the hippest producer around, Rick Rubin, for two albums with a third in the works. His music has been widely influential, and he’s beloved by two generations of music lovers.

“Look at the stars that turned out to honor him at the Grammys gala in February – Foo Fighters, Coldplay, Adele, Jonas Brothers, Faith Hill, Tim McGraw, Jennifer Hudson, Chris Cornell and even Kid Rock. At age 68, Neil satisfies his crowd better than Bob Dylan, Elton John or Rod Stewart do theirs. And they’d be envious of his 3.6 million tickets sold since 2001. Neil has been the uncrowned king of pop for five decades.

“The snobs on the Hall of Fame nominating committee finally put Kiss on the ballot this fall. I say put Neil Diamond on the ballot. I’ll vote for him and I’m sure many, many other voters will, too. See you at Neil’s induction ceremony to the Rock and Roll Hall of Fame.”
Have at it, Hotliners.

Posted by Michael Marotta at 8:47 AM