It's Thursday, Vanyaites, which brings us another edition of my glorious Cheap Thrills column. On tap this week: Mac & Cheese for all, the New Collisions blow up and Mikey Welsh shows off his work. Get down make love. 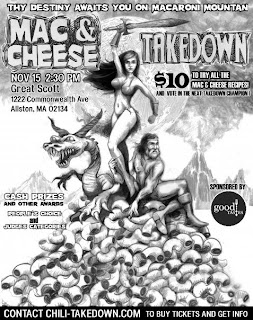 In June, Allston rock club Great Scott hosted Boston’s first-ever Chili Takedown, and the response was so strong you can still catch a whiff of the festivities in the men’s room. This weekend things get even cheesier, as local culinary experts take their Kraft to a new level at the Mac ’n’ Cheese Takedown. Several dozen pro and amateur cooks are pitted against one another in a friendly match to crown the mac ’n’ cheese champ, as well as other titles. An offshoot of the Chili Takedown created by Fitchburg native Matt Timms, anyone with a mac ’n’cheese recipe can enter, and anyone with $10 and a bottomless stomach can sample all the goods. The Great Scott bar is there to serve something to wash it all down with, and any flier that looks like a cross between a Manowar album cover and a box of Velveeta is OK in our book. Death to false mac ’n’ cheese!
Info: chili-takedown.com, greatscottboston.com, 617-566-9014

CRASH THIS PARTY
The New Collisions EP release party
Friday at 8 p.m., the Middle East downstairs, 472 Massachusetts Ave., Cambridge; 18-plus, $10
It’s been quite a year for Cambridge-based new-wave darlings the New Collisions. Buzz built steadily over the spring with an EP-release party at T.T. the Bear’s Place, a now legendary gig that found the Cars keyboardist Greg Hawkes joining the band onstage. Over the summer the band, led by platinum-blond pixie singer Sarah Guild and her guitar-wielding husband, Scott, opened several national dates for the B-52s and Blondie. Friday night, the New Collisions tie a nice synthesized bow on 2009 with a headlining gig at the Middle East downstairs to celebrate their new effort, “Invisible Embraces.” Produced by Anthony Resta (Duran Duran, Missing Persons), the new EP is another sleek rhythmic romp through a late-’70s throwback style that somehow sounds as fresh as ever, and the release party is a fitting salute before the New Collisions set out to conquer 2010 on a national scale. The Luxury, Thick as Thieves, Gene Dante and the Future Starlets and the Future Everybody provide local support in one fiery rock ’n’ roll spectacle, and for local music junkies, for just $5 more the Middle East is offering a package ticket that also allows access to the show upstairs featuring the Motion Sick, Static of the Gods and the Living Sea. That’s a lot of Boston rock.
Info: mideastclub.com, myspace.com/thenewcollisions 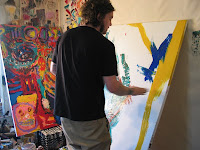 It’s easy to draw attention to the name Mikey Welsh by mentioning his stint as bassist for Weezer several years ago. But since unceremoniously leaving the indie rock superstars in 2001, Vermont-based Welsh has gained career traction as a painter, sculptor and artist. Friday, he shows off some of his best visual work at BLVD, Newbury Street’s hip skater and street wear fashion boutique that is providing the canvas for Welsh’s colorful expressions. Using his hands instead of brushes, Welsh’s abstracts and paintings have graced the walls of the Paradise Lounge, Cambridge’s former Zeitgeist Gallery and an exclusive line of Burton snowboards. Word is the after party goes down at the Otherside Cafe around 11 p.m., but don’t expect any Weezer on the stereo.
Info: mikeywelsh.com, blvdboston.com, 617-391-0233
Posted by Michael Marotta at 9:18 AM