Been detailing all the New Year's Eve parties around Boston for the past few weeks, but here's something unique: NO COVER. That's always the M.O. at the Alchemist, and for the second year running the Jamaica Plain nightspot has enlisted So Dope's Damien Paul to throw the party on the free. 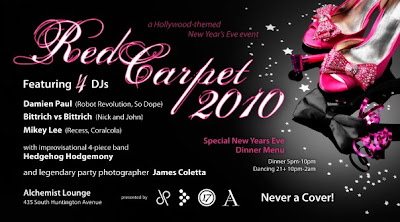 "Red Carpet 2010" gives the truly broke no excuse to not rage, as alongside DP's electro beats n' treats, they've got Coralcola's Mikey Lee and my boy John Bittrich (ex-Perennials, Black Freighter) in the DJ booth. So Dope photo James Coletta documents the Hollywoods, and performing live during dinner is something called Hedgehog Hodgemony, billed as "a jazzy 4-piece improvisational dance band featuring the music of Daft Punk (and) Radiohead." Cool shit, I always dig what Damien whips up.