Repost from my Hotline column. I still <3 this band: Editors are back, and like everyone else around the world, the British post-punk band went all death-disco on us.

But Editors' third album “In This Light And On This Evening,” still delivers Editors’ trademark haunting dirge-pop sound that earned them all those Interpol comparisons a few years ago. The strobe-lit first single, “Papillion,” has quite a Depeche Mode thing going on, but it still pretty much rules and word is the new album follows much of the same brooding synth-pop template.

“In This Light And On This Evening” drops here stateside next month (it hit in the UK in October), and Editors crash the House of Blues on Feb. 18. Previous local shows at Great Scott and the Paradise in recent years were quite an engaging experience (as opposed to, say, Interpol live experience), and Editors have quickly built a reputation and a band that elevates their game on stage. Tickets to the HoB show, as well as the rest of the dates for the winter tour, go on sale next Saturday, Dec. 12. The “Papillion” video is below. (Photo by Kevin Westenberg) 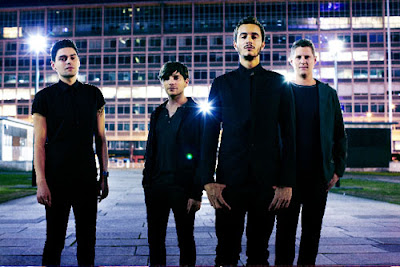 Editors Announce US Tour - February 2010
In This Light And On This Evening - Out Jan. 19 via FADER Label

Says the presser via Plus One Music: After two years away, Editors are returning to the U.S. for a long-awaited headlining North American tour this February in support of their highly anticipated new album In This Light And On This Evening. The album, which is out stateside via FADER Label Jan. 19, debuted #1 on the charts the week of release in the UK this past October and charted in the Top 10 throughout the rest of Europe.

Posted by Michael Marotta at 11:01 AM