Ahhh New Year's Eve, from watching my then-girlfriend Kathleen cheat on me with some blond yup named Josh at a high school party around 1995 to fending off fierce masses and wishing my more recent then-girlfriend was dead while DJing at the CommonGround last year, it's always an event to cherish. 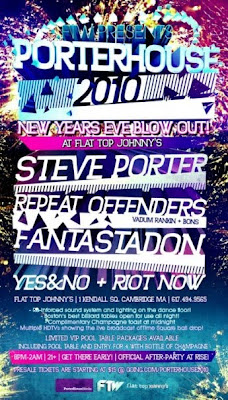 Tonight I'll be spinning at the Distillery in Southie, a needed respite from cunty clubland and faux-poh nightlife promises. But if I were out and about in $25-coverland, I'd be with Steve Porter, Repeat Offenders and the crew bound to kill it at Flat Top Johnny's. This massive Confetti Cannon is a sight to behold. Drink what you wanna drink, playa you hood rich. xoMv.
Posted by Michael Marotta at 7:58 AM