Anyone who reads this blog semi-regularly knows I believe Andre Obin is one of the true musical geniuses here in Boston. And tomorrow night at TT the Bear's in Cambridge the former one-half of Matters & Dunaway unveils his new project, Endless Wave. I heard the first offering, "Last Phase," on a WZBC stream on Friday, and hours later I was playing it at the pill.

Listen to it here, around the 13-minute mark of 'ZBC's Flyweight program.

Endless Wave appears to be heavy on the neo-shoegaze sound I expect to explode in the coming year, but there's a very slick pop element to this that isn't too far away from stuff like Silversun Pickups. It's a fairly engaging mix. I'm really excited to catch this set, which begins around 9pm, and the night is headlined by Soundpool, a group of upstate-NYers who add a bit of electronica to their swirling noise/effects sound. This should be a blast, and there's even a killer flyer: 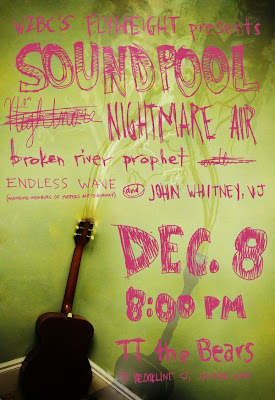 Posted by Michael Marotta at 11:15 AM