Anyone who has known me through the Dark Ages of a few years ago knows I was once GM of Bill's Bar. I'll have more thoughts on its closing later, but it looks like tomorrow's Bloody Beetroots show will be the club's last. What a high note. From today's Hotline: 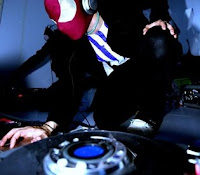 <Bill's Bar's last dance?
There is a rumor afloat that Bill’s Bar, the longtime Lansdowne Street rock club that has staged everything from garage rock and indie pop to hip hop acts and jam bands, may go out on an electro note.

Although some said the room would close late last month to make way for a western-themed saloon (a move that promises to further the Disney-fication of Lansdowne Street) it now looks like the doors will shut for good after Tuesday night’s Throwed dance party.

Party organizer Eric Marcelino tells Hotline the room was given a stay of execution since he had already booked the party several months ago and couldn’t find an alternate space.Italian dirty disco DJ duo the Bloody Beetroots will headline. 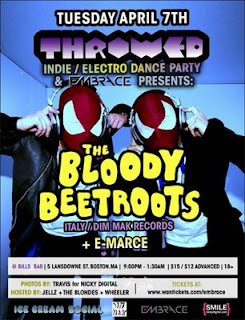 If Tuesday night is indeed the last dance, Bill’s is going out with a bang. Dim Mak Records’ Bloody Beetroots, who perform in masks and add a punk attitude to rave and acid dance tracks, are billed as the dirty love child of the Misfits and Daft Punk . Their Boston debut will come as a longtime rock club ends its existence.

“If you’ve ever gotten wasted at Bill’s Bar, or gotten thrown out of Bill’s Bar, this is the last chance for one last hurrah,” said Marcelino. “It’s going to be debauched.”

Doors open at 9 p.m., tickets are $15 and more information is at wanttickets.com/embrace.
Posted by Michael Marotta at 10:35 AM