A few weeks ago I was startled to hear Saul Williams' lethal electro-hop anthem "List of Demands" used in a Nike ad. So in advance of his show tomorrow night at the Paradise, I chatted with the NYC poet/rapper about his decision to sell the song to the corporate giant, which appears in the Herald today. 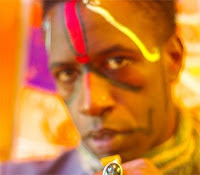 Williams is one of the more engaging and thought-provoking artists out these days, and his reasoning behind the pitch is solid, even if some fans are bullshit. But it's a podium, as he said, and damned if I'd criticize this guy for wanting his message heard. He has it right, even if he chooses Nike as the vehicle.

A few years ago, Carl and I caught his show at Axis just as “List of Demands” was released. It was an early, mid-summer gig on the Evil Strip, with the Red Sox out of town but the Eurotrash on their way to Lansdowne at 10pm. Williams hit the stage around 8:30 or so, with about 30 people in the room. It was so barren you could hear the bartenders talking ragtime, and his DJ looked flustered when he walked onstage. Suddenly, Williams came out, told us "it's not (our) fault the promoter fucked up," and invited everyone on the stage. He ripped shit up a good 45 minutes as the crowd formed a semi-circle around him, instantly creating a basement-show vibe and a personal party for those attending. I didn't mention it in the article, but he vividly remembers that show, and called it one of his "favorite shows of all time." Mine too. That's how Saul Williams rolls.
Posted by Michael Marotta at 1:00 PM