Florida says no to Truck Nutz

There are so many things that need to be discussed today -- Like... how Martin Brodeur rightfully dissing Sean Avery Friday night in the handshake line, the Devils ass-kicking at the hands of the Rags$, KRS-One's "Stop the Violence" tour being postponed after he got bottled on-stage in New Haven, the Boston Marathon ruing my life, the Daisy beatdown on the Rock of Love reunion and of course, my ever-growing desire to be elsewhere.

But all takes a back seat, for the time being, to the Florida senate trying to ban Truck Nutz!. Story after the jump! 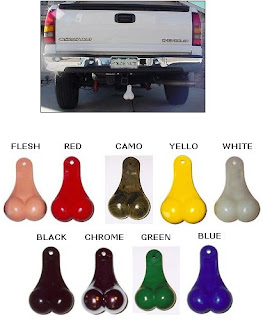 TALLAHASSEE - Motorists could face a $60 fine for displaying an increasingly popular attachment to the trailer hitch of their pickup trucks.

"Just as it would not be appropriate to show that device on the Senate floor, it's not appropriate to have that hanging from the back of a truck on a public road," Baker argued.

His provision was amended onto a larger transportation bill (CS/SB 1992) passed Thursday.

A companion House bill does not include the prohibition -- which was vigorously opposed a day earlier by Sens. Jim King, R-Jacksonville, and Evelyn Lynn, R-Ormond Beach.

"There's got to be better things for us to be spending our time debating," said Senate Minority Leader Steve Geller, D- Cooper City.
Posted by Michael Marotta at 11:54 AM