Devils lose again; put me in a Senior Center pronto

I am definitely mellowing in my old age. Last night, I plopped my fat ass on the couch, and went to war with my beloved-yet-outgunned New Jersey Devils as they battled the Rag$ at the oval shit hole known as Madison Square Garden, home of clearly the worst fans on Earth (Seriously, they’re all 40-something, secretary-fucking weekend-dad businessmen in cheap suits, with spoiled chubby 10-year-old kids named Ethan who wear replica Jagr jerseys with the numbers cheaply ironed on. These little shits are no different than the douches who wore Adam Graves jerseys back when I was in high school. And those kids are all gym teachers in Lindenhurst now, so they can go fuck themselves. Dad too, and not just when he’s yelling at junior for missing the cut-off man in a Little League game. But I digress.) 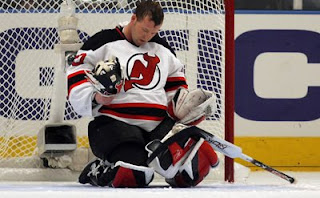 Anyway... I was saying I’m mellowing because... well... the Devils lost, and while I was pretty disappointed, I can’t fault my boys. Tie game until three minutes left, they fought and scrapped in an environment more hostile than the Moscow boxing rink in Rocky IV. I’m proud of them, even though they’re now down three games to one. This is not the most talented Devils team, but they don’t quit. If I ever run in John Madden, I’d buy him drinks until he passed out. This team has heart. I just wish they could score.

But beyond the game, I really enjoyed sitting down at 7pm with my lady and my long-time friend, ripping killer iz and ordering shitty-yet-tasteful take-out, rising to my feet in agony or joy every time something interesting happened. It’s well-documented that playoff hockey is like nothing else, and a Devils playoff push has become a rite of spring. There’s something so comforting about it. The day light outside when the puck first drops, the intensity within the arena, the balls-out effort of both teams involved, me wearing a t-shirt under my red Elias sweater. 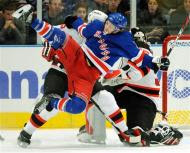 I don’t think I’ve ever truly enjoyed a Devils loss, but last night was simply great entertainment. Yes, I was inconsolable for a good hour post-game, but I really live for moments like this. If watching sport is nothing but a get-a-way from the bullshit rigors of the real world (from the human jazz stain who slammed into my parked Jetta on Barrows the night before, to making a last-minute tax dash with H&R Block’s finest foreign bureau preparation team) then last night was mission accomplished.

I just wished they won. A few years ago, I’d be looking to start a bloodied donnybrook with any fucktard wearing a blue shirt in the newsroom. These days, I appreciate the good times. Well, the good times before the game-winning goal breezed past Marty Brodeur.

We are not dead. These games are close. We stormed back 3-1 on a much-stronger Flyers team in the 2000 ECF, and we can pull that shit again. Ok, we don’t have the A-Line, but we have Brodeur. And I’ll never bet against any team that’s led by John Madden.
Posted by Michael Marotta at 9:53 AM