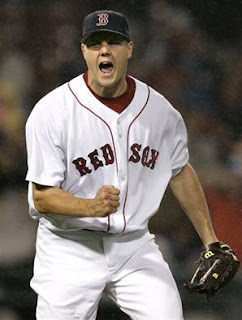 Great find by Phil, as apparently Jonathan Papelbon's dog chewed up the game-winning World Series baseball. Of course, there was a mini-controversy in 2004, when Doug "Eye Chart" Mientkiewicz said he pocketed the ball used for the final out in St. Louis, and was gonna pawn it off to put his kids through college.

Well, leave it to Pap to settle the ball dispute like this. From the article:

Well, the 2007 mystery is now solved. The World Series baseball is in Hattiesburg.

At least what is left of it is.

"My dog ate it," said Papelbon, who has a home in the Canebrake subdivision.

"He plays with baseballs like they are his toys. His name is Boss. He jumped up one day on the counter and snatched it. He likes rawhide. He tore that thing to pieces. Nobody knows that. I'll keep what's left of it."
Posted by Michael Marotta at 3:22 PM