Mozzer in a National Front Fiasco 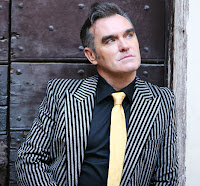 Oh Morrissey, back in the news with more throat related tomfoolery. The former Smiths frontman has caused an international ruckus with comments that he doesn’t live in England because it’s rife with immigrants, and that England "threw away" the country and lost its identity to foreigners. Tough to really argue with the man, here.

But wait! According to Mozzer aficionado Roommate Terence, our favorite coiffed mopester has filed a lawsuit against the NME, the high-class, Pulitzer-winning publication where the comments originally ran. He claims he was grossly misquoted, and will release the interview transcripts to reveal his innocence. Apparently the reporter in question has distanced himself from the story, and originally asked NME editors to remove his name from the byline. Stay tuned, fragmented nation, stay tuned.
Posted by Michael Marotta at 3:54 PM