So I’m in Florida, you may have heard.

The first day here has been pretty chill, and yesterday’s flight was, thankfully, fairly painless. I got about five hours sleep after Sean Lifestyle’s afterhours, drove down to Quincy to drop Lolabear of at Kristin’s, then trudged north on 93 to fly out of Manch Vegs. Nothing like being hung over with a bunch of ugly snowbird New Hampshire people in an equally ugly airport more than an hour away. My life is a Disney film, it really is. 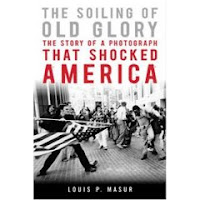 But to my shock and amazement, the flight flew by, as I started -- and finished -- “The Soiling of Old Glory: The Story of a Photograph that Shocked America” (working title: “Another Book About Boston Racism, This Time Eschewing A Noose in Favor of Clever Usage of the Stars and Stripes”). It’s a book passed on to me last week by the Weekly Dig’s David Day about a photo that ran in the Herald American in 1976, of a white teen attempting to harpoon an American flag-draped flag pole into the chest of a helpless black lawyer caught in a busing protest. Good read (review coming later, maybe when it’s released in March) and even the meek brunette hermaphrodite sitting beside me seemed to be interested as well. Now, I often board Southwest in Group A, race to the back of the plane, saddle up next to the window and pray that the fattest fuck boarding the plane doesn’t plop his ass next to me. (Mind you, I’m in NH, so the odds of a Dunkin Donut-fueled double-man sitting next to me are tripled than when jetting out of Providence, the other SWA hub.) 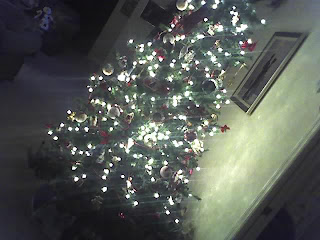 My parents have a fake tree, which is fitting, as Christmas in Florida is pretty fucking artificial. But I'm warn, so whatever.


But that was it for ambition. Since I’ve arrived, I’ve done very little, as according to plan. Within 24-hours or so, I’ve watched several movies: the Departed, Rocky IV, Rocky V, Christmas Vacation, the 40-Year Old Virgin, and the overrated feature called The Pats Own the Dolphins. I’ve lounged around and sang Bertie Higgins’ “Key Largo” in my head over and over. I thought I saw the Olsen twins this morning, but it was just two other anorexic hobbit daughters of some other retired parents here at the oh-so-elite Heritage Springs country club clubhouse. I’ve drank way too much Jager and enjoyed a breakfast buffet and two ace home-cooked meals from Momma Dukes. Tastes like Bay Shore in my belly, and I couldn’t ask for more. Not having to do scrum-fuck all day is fantabulous, though waiting for ESPNews to show the Devils-Flames highlights is sawing away at my patience stick.

Tomorrow we’re going to the dog track in St Petersburg, and I will try my bloody hardest to reenact the “Parklife” album cover. Then we’re going to the house of some relative I’ve never heard of, and before I know it I’ll be 29 and heading back to my own personal snow-ridden hell. As Belinda Carlisle once so graciously sang, “leave a light on for me.”
Posted by Michael Marotta at 8:29 PM