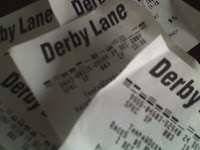 Christmastime in Florida took on an all new tradition yesterday, as I hit the race track for the first time in my life. They Derby Lanes greyhound races in St. Petersburg have been the highlight of the trip so far, and I only lost about $20 after a few hours of racing. My big wins: $11.50 and $16. What a thrill, and I think I have a new addiction. I’m going to personally bring the Wonderland track back to prominence in Boston. Dog racing is the new coke, and it was certainly more thrilling than spending the night at some random aunt’s house surrounded by cousins I’ve never met before.

It was a fairly ho-hum, and muggy, Christmas Eve, drenched in Jager and Cosmos and pomegranate drinks while awkwardly surrounded by close-knit “relatives,” one of which is in law school in Vermont and kinda resembled Rocky Dennis from “Mask,” and another adorable, young, hopefully of-age cousin that strongly resembled the foreign exchange student from “Better off Dead.” I may or may not have been creepy towards her, I don’t remember. (I spent most of the dinner, augmented by the biggest King Crab legs I’ve ever seen and a full, seven-course seafood meal, trying to figure out what she’d look like sprawled out naked on the Christmas Eve dinner table with an apple stuffed in her mouth and clam shells draped around her still-developing body). Some of the elders kept bringing up politics, especially when the daily tab that pays my bills was brought up, but I wasn’t gonna bite.

Overall, it wasn’t terrible, and these are very friendly, well-meaning people, but once again vodka became my ally in the always-a-struggle familial battle. Then again, back home we spent Xmas Eve at my teeny-bit psychotic aunt’s house, who is now hopped up on meds, and without a husband since he ghosted after learning my dead grandmother didn’t exactly leave the bounty he anticipated. So it beat previous years, and the kids in the room (I hear they are cousins, but without a detailed family tree layed out in front of me, who the fuck knows) were duly impressed by my knowledge of Guitar Hero-creators Harmonix, and how I knew some of the Boston bands included in the game. One “cuz” was all into Freezepop from playing the game, but I declined to tell him about the bathroom shenanigans at the singer’s pill afterparty just, oh, 72 hours earlier. And even kids in Florida know who Bang Camaro is, another sure sign of the apocalypse. 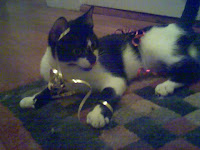 But through it all, I still miss my kitten, and it’s my birthday. More on that to come later on. Maybe once I’m done swimming in the pool. On Christmas. Swimming. It’s still all wrong.
Posted by Michael Marotta at 9:28 AM