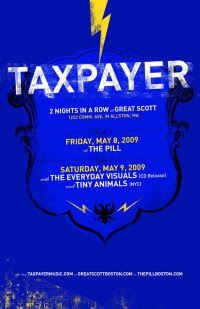 Next weekend will be a motherfucking doozy, some all-time epic shit going down in Allston. First, Taxpayer kicks off a two-night Great Scott stand with us at the pill Friday night, then on Saturday FTW celebrates its one-year anniversary with Designer Drugs at Circus (head asplodes, but more on DD later in the week).

If you haven't heard Taxpayer's amazing new album "Don't Steal My Night Vision," you're missing out on perhaps the best local release of 2009. It's phen-fucking-nomical. "We Have Arrived" and "The Less We're Impressed" are two of the best songs of the year so far. Can't wait to have them once again at the pill.

Ok, now it's time to get outside, off to May Fair in Harvard Square! Get out of the office, and into the springtime!
Posted by Michael Marotta at 10:36 AM