Tomorrow night at the pill we finally unveil the Daily Pravda's new venom-laced debut album, "Burning Bible Diamonds," in what should be one hell of an evening and rock n roll dance party. Details from this week's pill mailer:

Friday night we rage supreme as favorite sons of the pill the Daily Pravda drop by to level us with their epic debut album, Burning Bible Diamonds. Dubbed "crazy, big-room, Muse-like rock" in this week's Weekly Dig, Pravdapicks up where they left off at recent Halloween shows (as Suede and Ziggy-era Bowie) and set to claim a reputation all their own in this eyeliner-traced neo-millennial glam rock sequel movement that desperately needs a new leader of the pack. 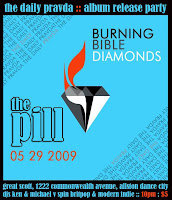 It's a sleek backdoor shuffle through Boston's spaghetti-plate streets on the eve of despair/desperation, a solid gold easy action comedown for the metallic genie adhering to a strict no-morning-after policy. A modern world deserves modern sounds, and the forceful glam glide of Pravda adds venom to the glitter, a sly wink to the smile and substance to the style.

Preview some of the tunes over at the Pravda space, and help us raise a glass and smash it to bits as residents pill DJs Ken and Michael V provide the jilted lover soundtrack before and after the band. This is where the firecrackers reside.

Posted by Michael Marotta at 12:40 PM