Chillin in the Herald's news section today, with a report on the two animal benefits going down next door to each other in Cambridge tonight -- Kitty Angels at TTs, and Pinups for Pitbulls at the Mid East.

It will be raining cats and dogs in Cambridge’s Central Square tonight - and music fans have their pick of the litter. 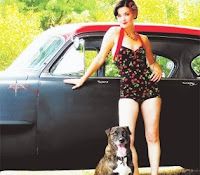 By coincidence, two unrelated animal benefit shows being held next door to each other will be rocking out and raising money for four-legged friends. Pinups for Pitbulls is looking to bolster its pet cause at the Middle East, while Twisted Rico Management’s Kitty Angels benefit at the adjacent T.T. The Bear’s Place on Brookline Street wants to scratch up funds for felines.

“It’s an animal corner,” said Pinups for Pitbulls’ show organizer Miss Brindle. “The fact that (Central Square) is consumed by animal welfare is all good. If you’re a cat person, go there. If you’re a dog person, go here.”

Pinups for Pitbulls is a nationwide network of pitbull lovers that puts out a calendar of pretty gals and cute pups to raise money for pitbull rescue and breed awareness. The organization’s shows across the country have raised more than $20,000 and saved the lives of 150 dogs, according to Brindle. Tonight’s lineup offers a three-pronged serving of local indie rock with Midatlantic, Silent Century and St. Helena. 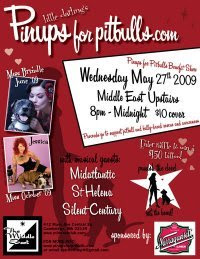 “The bands match up very well, and all are involved with animal rights and activism,” said Brindle, a model who is this year’s Miss June in the Pinup calendar.

The benefit for Kitty Angels, a Tyngsboro-based no-kill cat shelter that helped place more than 600 cats into homes last year, is a more ambitious affair. It features 14 bands and performers doing 20-minute sets. Among those scheduled to play are the Russians, The Sharp Lads, Rick Barton, Jason Dunn of the Luxury, the New Alibis and others.

Both shows start at 8 and the admission for each is $10.

“Anyone who respects, admires and enjoys a little (cat) should come to our show,” said T.T.’s general manager Kevin Patey.

Organizers of the benefits won’t be fighting like, well, cats and dogs. But they’re not quite ready to cuddle up to each other.

“If it were a dog benefit, we’d try to join forces,” Brindle said of the competing event, “but since it’s for cats we figured we’d do our own thing.” (**Above photo courtesy of Cherry Blossoms Photography**)
Posted by Michael Marotta at 7:40 AM