It's a holiday weekend ahead, and today's Cheap Thrills column in ze Bahsten Herald reflects as such, with a Ladies-'80s sing-along, Johnny Cupcakes' 3-year-anniversary party and an MFS open house (translation: FREE).

Remember those old radio commercials for monster truck rallies, in which they screamed “you’ll pay for the whole seat but you’ll only need the edge”? Well, that’s the stand-up-and-shout scene Saturday at the Coolidge’s Ladies of the ’80s Sing-along, where Bigfoot and Grave Digger are swapped for Cyndi Lauper and Madonna. Bust out the Conair hairdryer and fingerless lace gloves as we aurally relive the decade that just won’t die, from Blondie to Benatar to other pop-trash you listened to before hitting the mall. It’s all hosted by Alamo Drafthouse, the jelly-bracelet brains behind previous sing-alongs starring Prince, Michael Jackson and R. Kelly.
Info: 617-734-2501, coolidge.org 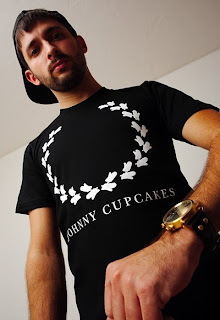 Pretty much every wide-eyed tourist and fresh-faced college student strutting Newbury Street gets wicked bummed when they realize Johnny Cupcakes is a hip clothing store and not a bastion of sugary baked goods. So to celebrate the three-year anniversary of his T-shirt business’ reign on the Newbs strip, John Earle is giving the people what they want - free cupcakes! Oh, there’s also limited edition T-shirts, good times and the guaranteed hordes of hipsters waiting for the latest threads. It’s good for post-hardcore young-people-watching and pre-hardcore sugar rushes.
Info: 617-375-0100, johnnycupcakes.com

THE F STANDS FOR FREE
Open house at the Museum of Fine Arts
465 Huntington Ave., Fenway. Monday, from 10 a.m. to 4:45 p.m., FREE
Barbecues are overrated. You stand around drinking swill booze, stand under the sun like a rotisserie chicken and your veggie burger ultimately rubs ends with the dead meat on the grill. So trade BBQ for MFA at the museum’s Memorial Day open house. Presenting art from around the world - from Venetian Renaissance paintings to contemporary Japanese ceramics - the East meets West theme is highlighted by two performances by the ANIKAI Dance Company. Your dried out veggie burger and farmer tan is finally outmatched.
Info: 617-267-9300, mfa.org
Posted by Michael Marotta at 10:39 AM