Fuck yeah, tonight it's on. Several months ago I discovered Veil Veil Vanish through a Metropolis Records catalogue, and immediate reached out to them for a gig at the pill. Obviously, connecting a band from San Francisco with a Boston dance party is no small accomplishment, but things worked out and tonight we party Bay Area style. Will Clarks for EVERYONE! 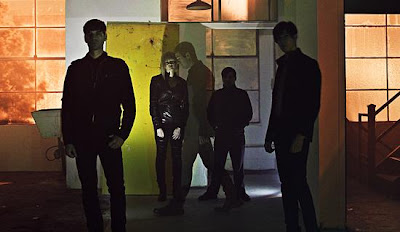 friday june 18:
Veil Veil Vanish
San Francisco's dark shadow on the dance floor
!! Phoenix poll: Best Club Night (Dance) !!
Eight days after being once again named “Best Club Night: Dance” in the Boston Phoenix “Best Music Poll” – the 3rd straight year? Longer? – the pill launches its live summer sessions with a black strobe shot straight from the hazy darkwave gates of San Francisco.
After cultivating a cult following on the west coast, Veil Veil Vanish have finally brought their atmospheric underground post-punk sound to the eastern end of the stateside dance floor, an electro-shock attack of reverb-rock cast in the increasingly black shadow of gemstone pop.
Though brand-name band comparisons are often callous reaches in promotional posturing, San Francisco’s annual NoisePop festival summed things up nicely, writing that Veil Veil Vanish “have made a name for themselves by combining ‘80s goth and ‘90s shoegaze into a dramatic and potent concoction of The Cure meets A Place to Bury Strangers.” Works for us.
While we first discovered Veil Veil Vanish after they contributed a spirited cover of the Cure’s “The Upstairs Room” to the 2008 tribute album “Perfect As Cats,” we became enthralled after Metropolis Records tipped us off to their critically acclaimed debut album “Change In The Neon Light.” Darkening up the pill’s grittier dance sets through the winter, Veil Veil Vanish counters the emerging sunlight of spring, creating an appropriate sonic-haze live dance set in the gloomy modern indie midnight glow of Allston Rock City.

Get acquainted with Veil Veil Vanish over at myspace.com/veilveilvanish, in particular the recent pill dance hits “Modern Lust” and “Anthem For A Doomed Youth.” Before and after the band, DJ Ken & Michael V spin the best in Britpop, Modern Indie & beyond at Boston’s best dance party. And because our live guest hails from San Francisco, we’ll be drinking Great Scott’s famous Will Clark cocktail all night. Look sharp. xothepill. 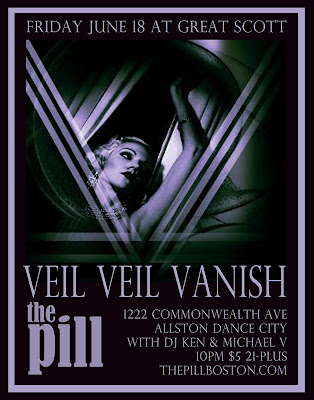 Posted by Michael Marotta at 8:27 AM