Tonight: The Depreciation Guild @ the pill

Oh shit, it's the Depreciation Guild tonight at the pill, and boy oh boy can I not wait to neon-daydream with these cats... 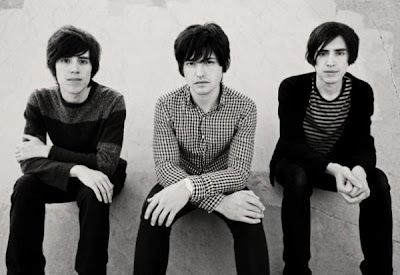 friday june 25:
The Depreciation Guild
A skygaze pop comet in an 8-bit stratosphere
The neon lights once again explode in pixilated reverb synths Friday at the pill as Brooklyn’s the Depreciation Guild continue our live summer session at Great Scott with a cascade of blissful sonics for the skygaze generation.
A sharp sonic blend of both early-‘90s dream-pop yearning and the synthetic blips and bleeps screaming from a modified Nintendo Entertainment System, the Depreciation Guild sound is that of an exploding star crashing down in a microchip landscape.
Before two of its members found glory with The Pains of Being Pure At Heart, the Depreciation Guild drew rapt attention for its Famicon-enhanced 8-bit electronics, and this year’s critically-acclaimed “Spirit Youth” album (Kanine Records) is set to elevate the band to greater atmospheres by incorporating a greater wash of metallic guitar reach while remaining faithful to the band’s pop vision.
As front man Kurt Feldman quipped to Spinner.com before a gig at SXSW earlier this year, the Depreciation Guild sound, quite frankly, is “pretty synthpop with loud, distorted guitars.” Furthering the point, the Onion’s AV Club Review recently noted that the Guild’s "Nintendo-synth hooks and John Hughes-soundtrack dynamism splash the songs with a kind of expertly crafted lushness."
The Guild just wrapped up a stateside dream-pop romp with Serena-Maneesh, and before going back out on tour with the Pains of Being Pure at Heart the band has strung together a run of club dates, finding the time to spark the pill in ultrasonic guitar swirls and 2A03 sound chips for the sky ghosts of dance parties. This is the sound of dreaming brightly.

Catch a moonlit preview of the Depreciation Guild at myspace.com/thedepreciationguild, and while you’re scouting, get lost in the beautiful haze of the incredible Jack Ferry-directed “Dream About Me” video. Before and after the band, DJ Ken and Michael V spin the best in Britpop, Modern Indie & Beyond. Look skyward, look sharp.
xothepill 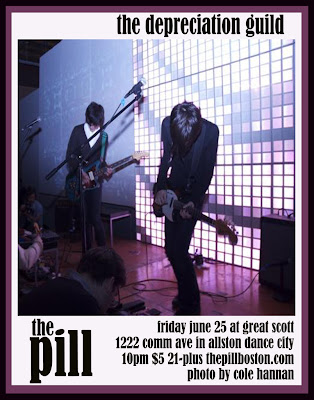 Posted by Michael Marotta at 7:00 AM