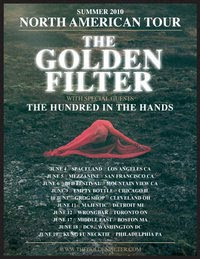 I tried to pimp the show in my last Boston Herald Cheap Thrills column, but typical of the newspaper, it got cut because they just wanted to run Father's Day items. Whatever.

GLITZ-POP EXPLOSION
Four To The Floor presents The Golden Filter at the Middle East
Thursday, June 17 at 8 p.m. at 472 Massachusetts Ave. in Central Square, Cambridge; 18-plus, $10 in advance, $12 day-of-show
In April of last year, early attendees to the sold-out Presets concert at the Paradise were in for a sweaty disco-dance treat -- a rare opening act performance by fresh-as-a-daisy New York synth-pop duo the Golden Filter. The band had kept a low profile while unleashing one of the sexiest dance floor hits of the year (“Solid Gold” and its treasure trove of remixes), but the live show was a showcase of things to come. Fast forward 14 months and the Golden Filter’s debut album “Voluspa” has exploded in both the indie rock and dance scenes, with tracks like “Hide Me” and “Dance Around The Fire” showing a glitzy, glitter-infused electro update of post-millennial disco. It’s an ultra-sultry noir-pop sound, led by the angelic voice of Australian-born diva Penelope Trappes. An added bonus is the openers, fellow Dirty Apple duo The Hundred In The Hands, whose blend of synthetic psych-pop and post-punk is certain to explode by the turn of the calendar. Add local electro-rock kids Southern Belle, who are just back from tour, and this is one white-hot show that should pack the Mid East’s upstairs room to the neon gills. Don’t wait to get tickets at the door.
Info: thegoldenfilter.com; mideastclub.com, 617-864-3278

Posted by Michael Marotta at 9:24 AM