The Drums cover the Supremes

Friday night at the pill I spun the Drums' "I Felt Stupid" right into an old Elkland jam, "I Think I Hate Her." It felt right. Way before the Drums set a course to become pop darlings -- watch it happen this summer -- Jon Pierce fronted a NYC synthpop explosion named Elkland (also featuring Drums guitarist Adam Kessler).

They played the pill several times, including our 8th anniversary, and well, few boys have ever stolen my heart's sanity like Mr. Pierce. This was rare air.

So yeah, watching/listening to him sing the Supremes "Where Did Our Love Go" for the UK Sun's Showbiz Bizarre Bizsessions just takes me places few people, boys or girls, could ever dream of. Le sigh. Press stuff from Girlie Action after the video jump.

Following a massive wave of critical acclaim, New York City’s own The Drums are preparing to release their self-titled debut album on Downtown Records.

It will be available June 8th digitally, with the vinyl following on August 10 and the CD will hit stores in September. The US version of the CD will contain bonus tracks not found on the UK release.

After the release of their debut EP Summertime! and a string of tour dates in the UK, The Drums were listed at #1 on both Clash and NME’s Top Tips of the Year and #5 on the BBC’s Sound of 2010 poll. Pitchfork’s readers voted the band as ‘Best Hope for 2010’ in their 2009 Readers’ Poll and the band topped Shazam’s Sound of 2010 list as the most searched band by users in 2009.

You’ve heard the buzz and with the release of the band’s debut album, the songs speak for themselves. 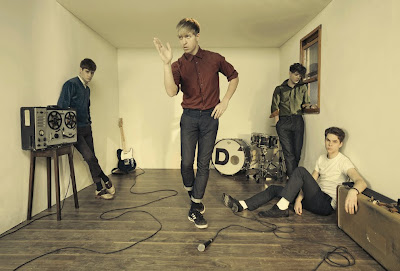 Posted by Michael Marotta at 12:58 PM