The Pill wins Best Dance Night in the Phoenix

Hey look at that, another Best Club Night trophy for the mantle. This might be the 4th or 5th straight year we've won this -- we've lost count -- but like the Yankees in the late '90s, even those givens against the Braves and Mets still feel pretty sweet. Thanks to all who voted in this Best Music Poll. 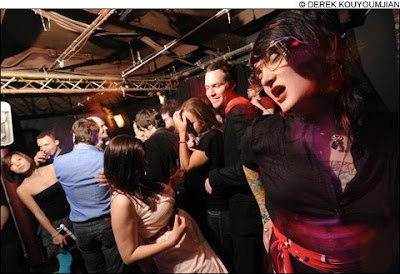 The view this year hasn't been so pretty for the window-gazing door guy at Allston's Great Scott. First, Marty's Liquors packed it in and left a dull bunch of plywood in its place for a year. (Hail, hail, Kelly's Roast Beef.) Then, crosswalk buddies Uno's Pizzeria (sure, scoff, but their laid-back bar was Allston's snickeringly best-kept secret for years) folded. Hey, at least the McDonald's sign is still flickering. All the same, Friday nights can make all the urban decay go away. Boston's longest-running dance party broke ranks with the dance scene with a simple set of principles: loose Britpop and indie formats that pick up where your car stereo left off, bare-bones light-show theatrics, and no dress code. It's never failed to rule. But you obviously don't need us to tell you that.

Runners-up
2. Foxy at ZuZu
3. Maneuver at Middlesex Lounge
4. Thunderdome at various locations
Posted by Michael Marotta at 8:17 AM