Bret Easton Ellis's new novel "Imperial Bedrooms" gets the release treatment today from Knopf Publishing, and to celebrate, I reviewed the dashing piece of work in this past weekend's Herald. Yes, my last Herald piece as a Staff Writer was on Bret Easton Ellis. How very Michael. Can't wait for the book signing next Thursday. 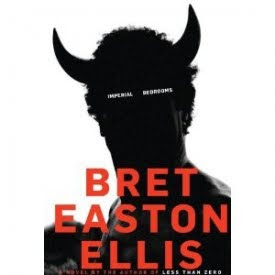 As Hollywood proves yet again this weekend (“The A-Team,” “The Karate Kid”), it’s possible and profitable to remake, reboot and reimagine movies from the ’80s.

It remains impossible to rewrite a book.

But Bret Easton Ellis, that compelling literary voice of The Decade That Won’t Die, is back Tuesday with a sequel to his most important work, 1985’s “Less Than Zero.”

“Imperial Bedrooms,” Ellis’ stunning seventh novel - which he will read from at the Brattle Theatre in Cambridge on June 24 - tracks the lives and deceit of the network of friends and enemies who first appeared in “Less Than Zero.” The characters who defined the so-called “Catcher in the Rye” for the jaded, disaffected and affluent youths of the ’80s are now 25 years older and running amok in present-day Los Angeles.

Narrator Clay (the Holden Caulfield of his era) is now a screenwriter, back in Tinseltown after a sabbatical in New York City and ready to cast his new film, “The Listeners.” It’s a movie set in - of course - the 1980s. As he returns to his home city, he finds the same old song and dance - and same friends, in particular ex-girlfriend Blair and junkie-turned-pimp Julian (who was played with frightening realism in the 1987 movie adaptation of “Less Than Zero” by Robert Downey Jr.).

About all that’s changed since the first romp down Sunset are the names of the hip, new spots, the name-dropped celebrities and, of course, the technology. Now we get text messages and online social networks where we once had pay phones and MTV. But the undercurrent of moral bankruptcy remains, and it remains Ellis’ strongest vantage point.

Like its predecessor, “Imperial Bedrooms” takes its name from an Elvis Costello song, serving as a reminder that while this book takes place in a new century, its themes are inherently ’80s. And maybe that’s Ellis’ point.

Ellis has always been a master of blurring the line between reality and fiction. The first line of this new novel - “They had made a movie about us” - immediately smashes that wall, allowing Clay to both praise the first book’s honesty and bemoan the Hollywood film adaptation. He slams actor Andrew McCarthy’s portrayal of Clay and notes that the movie failed to recoup its production costs. Classic Ellis.

“Imperial Bedrooms” is unlikely to generate the attention and controversy of “Less Than Zero” or Ellis’ “American Psycho.” But it’s a fitting evolution for an astute writer, who doesn’t deserve to be faulted for noticing that the disillusioned youths he famously chronicled are no less messed up as adults. It truly is the ’80s all over again.

mmarotta@bostonherald.com
Posted by Michael Marotta at 11:26 AM