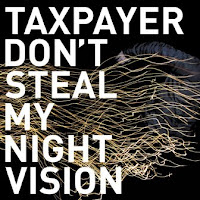 If I wasn't locked into the Greatest Dance Party the East Coast Has Ever Seen this evening, I'd sure as fuck be at the Paradise R.C. for Taxpayer's CD release party for "Don't Steal My Night Vision." Also on the bill are pill vets the Bon Savants and upcoming guest Age Rings, which is really one sweet victory for local rock.

An even greater victory, this sophomore Taxpayer disc could be the best local release of the year, blending an old school Burma/Replacements end.of.dial vibe with modern day indie tenacity. "The Less We're Impressed," track 2, has been entrenched in my dome since hearing it more than a month ago, and lead single "We Have Arrived" is a rock n' roll racehorse. This shit absolutely kills. And if you're Dise-ing it up tonight (can't blame you), swing by GS for the nightcap party (will blame you if you don't).
Posted by Michael Marotta at 11:51 AM