Le Castle Vania vs the Virgins

No, this isn't about some underage disco stampede outside an Atlanta nu-rave nightclub, but that would probably rule, too. 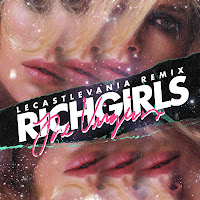 Instead, it seems perennial Vanyaland favorite Le Castle Vania is celebrating touching down at SXSW by giving us another beat-treat, this time suping up the Virgins' ace single, "Rich Girls." I totally expected it to go batshit banger at the end, but instead it's a steady fattening up of a great indie-disco track from last year.

Everything Dylan Eiland touches is gold, and this is further proof. Listen to it on his 'Space, and download it for free near the FREE MUSIC block under the player.
Posted by Michael Marotta at 12:51 PM