Love is All, tonight at GS

From the category of Things That Didn't Find It's Way Into Herald Print This Morning:Back in February, MGMT and Yeasayer rolled up to Great Scott and melted every face in the 240-person capacity room. Even before it went down, it was one of those “last chance to see these guys in a room this small” kind of shows. A few months later, MGMT sold out two nights at the Paradise Rock Club, and Yeasayer followed suit with its own ‘Dise gig in October. 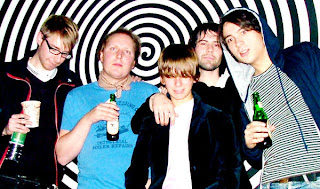 The next in the “catch them now before your mom knows who they are” line of double-headliner bills hits Allston’s Great Scott once again this evening. This one features Sweden’s Love Is All and Brooklyn’s Crystal Stilts, with local kids Reports opening things up.

How different is the modern world of indie in Sweden and Brooklyn? Where Love Is All channel the frantic energy of early post-punk with equal parts saxophone, guitar and keyboards, Crystal Stilts takes things down a notch with moody psych rock that’s become a blog favorite. Yet on the same stage, it should mesh perfectly.

Despite the difference in sound, both have one thing in common: Neither will be doing the club circuit next time in Boston. Doors at 9 p.m., it’s an 18-plus show and the cover is $10.
Posted by Michael Marotta at 7:59 AM