Now I’m too old and crotchety to be getting all excited about touring-band shows anymore, but I nearly shat out my limited edition “We Fly… Tonight” maxi-single when I saw that De/Vision are coming to North America next month. 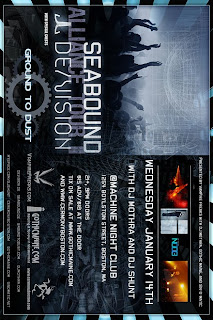 Even more shocking than the German synthpop legends’ domestic jaunt is that they’re coming here to shitty-assed Boston. While I’m no fan of the club Machine or its D&D head-in-the-black-cloud fetish clientele, this is a suitable venue for this and I’ll easily deflect many a dirty stare from the goth leftovers in order to have fun.

I’ve been obsessed with De/Vision since the moment I heard 1992’s “World Without End” many moons ago, and while the piano-ballad era of recent years hasn’t painted them as well as the Antiquity-Fairlyland-Monosex era, this will be some epic shit. I won’t demand to hear “To Be With You,” a Top 5 Michael V song since college and still a mix-tape staple, but I will hope for some pre-1999 material. De/Vision was truly the soundtrack of my life in the late ‘90s, and along with Wolfsheim (who sucked live), were my two favorite acts during this period.

Outside of the quite amazing track “Hooked,” Seabound never really did much for me. I’m pretty detached these days from the grossly stagnant EBM-darkwave scene, but regardless, I’ll be reliving some golden days at this shit next month. Very exciting…
Posted by Michael Marotta at 1:39 PM