Want a Cupcake t-shirt? Get in line 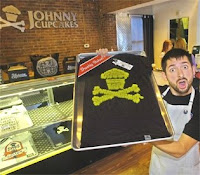 If you're finding out about this now, you're shit outta luck, as kids started waiting in line Tuesday at 5am. Yes, Tuesday at 5am, for a $75 t-shirt. Craziness. But Johnny "Cupcakes" Earle is one chill dude, and to think he's pulling in $3.75 million in sales this year after starting the company in 2001 out of his '89 Camry gives hope to everyone. He also now has a Melrose Blvd store in Los Angeles to match his two Boston-area shops.

Recently named Number 1 Young Entrepreneur in America by Business Week, Earle proves that one idea is all is takes, whether it be an Internet search engine or putting a cupcake atop a skull and crossbones and slapping it on a shirt.
Posted by Michael Marotta at 11:21 AM