Keep weapons away from Clint Malarchuk

So former NHL goalie Clint Malarchuk accidentally shot himself in the grillpiece. Aside from the obvious hilarity, it also allows us to revisit the most grusome injury ever to happen in a professional sporting event (after the jump!): 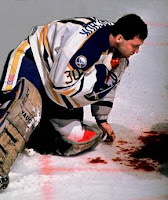 "OCT. 9, 2008 -- An ex-National Hockey League goalie — best known for surviving a skate slice across his jugular during a game — accidentally shot himself in the chin Tuesday with a .22-caliber rifle at his Fish Springs residence.

Clint Malarchuk, 47, was taken to Renown Regional Medical Center in Reno by helicopter for treatment.Douglas County sheriff’s deputies were investigating the incident Wednesday to determine if the shooting was accidental.

According to reports, officers were dispatched to the Malarchuk’s home at 2:30 p.m. Tuesday after his wife reported her husband accidentally shot himself."

And a recap of the throat slash:
On March 22, 1989, one of the most gruesome looking sports injuries ever to happen occured. In an NHL game between the St. Louis Blues and Buffalo Sabres, two playerscolled at the front of the net, and one player's skate catches Sabres goalie Clint Malarchuk on the neck, slicing open his jugular vein.

Blood started pouring from his neck onto the ice--yet amazingly, Malarchuk left the ice under his own power with the assistance of the team's trainer. Seven people in the stands fainted, two had heart attacks, and some of his own teammates threw up on the ice.
Posted by Michael Marotta at 11:14 AM