The best news this week hasn't gotten much attention, but apparently MTV archived its entire video collection, putting 16,000 videos online for free viewing, in addition to a few thousand other clips and concert footage. It's all at MTVmusic.com. 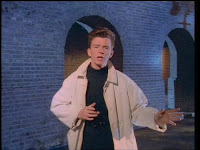 From today's column: At last it’s possible to watch Toto’s “Africa” and Aphex Twin’s “Windowlicker” with the click of a mouse. Throw in Vanya favorites from Suede to Crystal Castles, and this shit is no joke.

It also should be noted that Rick Astley's "Never Gonna Give You Up" has crashed both the Top Rated and Top Viewed lists, proving that Rick Rolling is alive and well and more relevant today than "Thriller," "Vogue" or "November Rain."
Posted by Michael Marotta at 9:54 AM