In the Papers: Low Vs Diamond

From the "Next Big Thing" file: GO: LOW VS. DIAMOND AT THE PARADISE 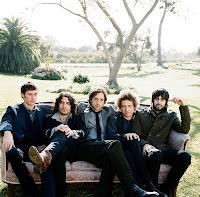 out Brooklyn’s intrepid genre-bender Santogold tomorrow at the Paradise, make sure to arrive early to see Low vs. Diamond, a Los Angeles quintet we predict will be one of 2009’s biggest new rock acts. With a stadium-sized sound that echoes U2 and the Killers, mainstream success seems inevitable. Don’t be surprised to see Santogold opening for these stylish cats at a larger venue this time next year." Tickets: $22. Call 617-562-8800. - MICHAEL V.

Note: I've been playing "Heart Attack" during bedroom sets at the pill, though it might be a bit too mainstream. But the name comes from the tag the band gave the fights the singer (last name Diamond) would have with his ex, Leyla "Lo" Safai from Heartsrevolution.
Posted by Michael Marotta at 8:24 AM