So Oasis ain't playing NYC, but a bunch of street performers will play new 'Sis tunes today in Manhattan.

The next few days promise to be pretty ossum, as The Fatal Flaw play the pill tonight, there's another Circus electro 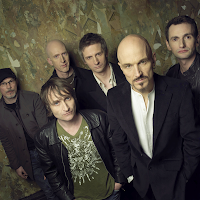 party at Privus tomorrow, and then motherfucking JAMES is at the Dise come Sunday and Monday.

Few bands turn me into a schoolgirl like James, and the lady at home has been saddled with a conastant rotation of "Laid," Whiplash" and the singles collection since we moved in last week.

The last time I saw James was at Lollapalooza 1997, and they went on before Korn and Tool. I remember standing in a dirty field at Randall's Island, a part of the maybe 5% of the packed crowd who was there to see James. 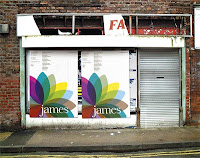 Surrounded by Korn fans yelling "faggot" (irony never lost, Mr.Davis), the band not so feverishly launched into "Out To Get You," perhaps the best James song ever written.

Afterwards, Tim Booth leans into the mic and says "We like to start off slow, so you expect the worst." Pure bliss followed, with much of the set comprised of "Whiplash" tracks and favs (Laid, Born of Frustration, Sit Down). I might have made out with Pete Lenz during the entire set, not much else is clear...

Something tells me this time will be even better. (Also coming up next week: A PLace To Bury Stangers at the Dise Tuesday, and Jiss & Chambers/Sun Lee Sunbeam at the Mid East Thursday, which is also the date of the Passion Pit EP release party at GS.)
Posted by Michael Marotta at 9:40 AM