Insanely excited for the pill tonight, as Worcester trio DOM roll up to Great Scott to orgasm neon gold all over our Britpop loving asses. The NME has been all up in their jam this week, and in an act of complete coincidence, the Boston Phoenix this week named them Best Band in Massachusetts in our 50 Bands / 50 States feature. Gonna be off the chain. 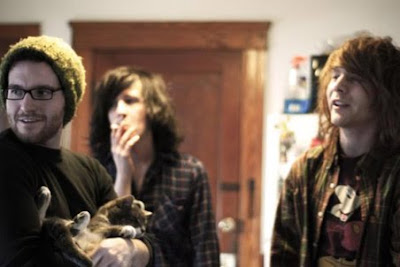 Though Dom is already sick of the comparison (which Michael V first rambled about on FNX Radio in April), monolithic synth-wave track “Living In America” is the best song MGMT never wrote, and a more than perfect replacement for the disappointment of the latter’s shitty second album. But to cast Dom as mere filler for mainstream rock’s never-ending letdowns is disingenuous.

This is without a doubt the next band to explode out of Massachusetts, and a gig later this month at the Village Voice Siren Music fest in NYC as well as some purely coincidental upcoming alt-weekly accolades should cement the cause. Dubbed the next Passion Pit by more than a few kids around these parts, Dom's vibrant sardonic pop is as gritty as it is neon, a shimmering view into the next wave of sounds that blur the line between art and reality.

And though relatively new to the game, Dom already has national attention. Said Pitchfork a few months back, weeks before they gave the EP an 8.0 (besting the "Chunk of Change" EP’s score of 7.9): “Dom makes sunburned guitar pop with fat hooks and stargaze synths that sound triumphant, heartbreaking, and totally immediate.”

Whether or not fist-raised party jam “Bochicha” is really the face-off anthem for the American Hockey League Worcester Sharks is irrelevant - in this dream-pop land of Dom, anything is possible because everything is possible. So sexy, indeed.

Get acquainted with Dom and the already locked-in 2010 Song of the Year “Living In America” over at myspace.com/imfur, and wonder why this shit isn’t all over the city by now. Before and after the band, DJ Ken & Michael V spin the best in Britpop, Modern Indie & Beyond. Look sharp. 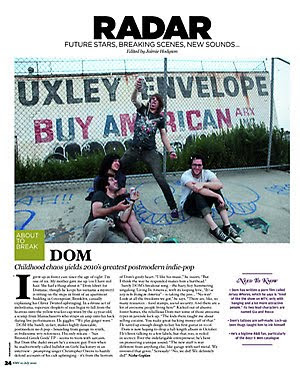 Posted by Michael Marotta at 12:16 PM