Re-post from my Boston Phoenix On The Download blog strike: 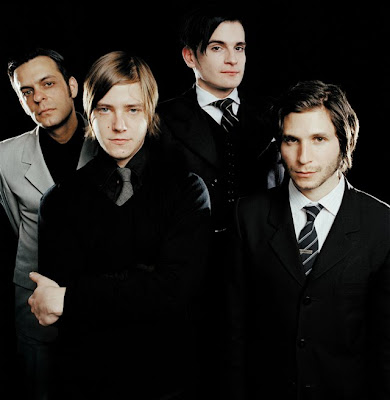 Interpol's been in the game for more than a decade now, so it's only fitting that a musical "return to form" was in order. Back in April, several months after drummer Sam Fogarino told Paste Magazine that the repressed-but-remarkably-dressed New Yorkers' new album would have a sound reflecting to their early days, Interpol released "Lights," the brooding first single off their upcoming self-titled album (which drops Sept. 7 off Matador).

Today Interpol followed that up fairly quietly, releasing a another new track off the creatively-titled Interpol dubbed "Barricade," which can now be streamed off 130BPM.com or purchased via iTunes. The track has a bit more post-punk spunk than the balladry emitted on "Lights," and sounds essentially like a bridge between a leftover track off 2001 debut Turn On The Bright Lights and follow-up sophomore album Antics. Despite that, it's really not a bad tune.

But there seems to be something missing in "Barricade," and we're not talking about bassist Carlos D, who left the band in May (replaced by David Pajo of Slint) but still performs on most of the new disc. Nah, what's missing is ease. Early Interpol tracks like "NYC" and "PDA" seemed effortless; they possessed a icy glide that made the four stand out from their more punk-leaning New York brethren. The songs had a confidence all their own, and held up in any sort of context, the heralded new Dirty Apple scene of the time be damned.

"Barricade," on the other hand, seems a bit forced, from Daniel Kessler's almost awkward guitar line to vocalist Paul Banks' overextended yelp. It certainly trumps most of everything found on 2007's major label debut Our Love To Admire, but it's a step back from the early-vein promise suggested by "Lights." There's almost a bit of desperation found in "Barricade," which is new ground for Interpol, and we'll need the rest of the album to properly judge its magnitude.

Luckily, Boston will get a closer listen at the new material before the album drops or leaks in September. Interpol rolls into the House of Blues on Aug. 5, but be sure to get there early, as also on the bill are two fantastic indie rock upstarts: New York's dance-minded Postelles and Georgia's sonically-enhanced Twin Tigers.
Posted by Michael Marotta at 1:56 PM