This ran in today's Boston Phoenix -- an OUT column on Girlfriends' 7-inch release party and tour kickoff last week at Great Scott in Allston. 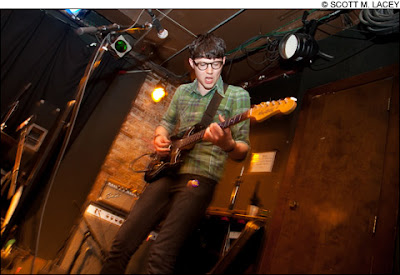 An hour before Girlfriends hit the stage last Thursday at Great Scott, singer/guitarist Ben Potrykus was afforded the luxury of not having to make change.

"Keep it," a girl standing at the merch table said after handing Potrykus more than enough cash for Girlfriends' new seven-inch, "Gov't Seizure"/"Creep Stuff." "You're going on tour, that's awesome!"

Girlfriends are hitting the road indeed. After last week's kickoff in Allston, the jangly lo-fi garage-punk trio set off for 44 shows in 44 days before wrapping up in Providence on August 14. (They return to Great Scott for a gig with Reports and Eux Autres four days later.)

If any city can't get its shit together — from San Francisco to Ypsilanti — it'll be the city's loss. In less than a year of playing together, Girlfriends — rounded out by Jennifer Dowty (bass) and Andrew Sadoway (drums) — have the buzz that suggests great things are to come.

A homonymous cassette-only release and the "Good To Be True" digital single off Floating Garbage Continent Records got the blogs buzzing, and last month Girlfriends snagged the "Best Garage/Psych Band" award in the Phoenix 2010 Best Music Poll. Now the "Gov't Seizure" seven-inch — recorded at and released off Weymouth's Aurora Seven Records — could position them to be our country's answer to UK garage freakbeat kids Thee Vicars. It's a raucous sonic explosion wherein under the grainy echoing distortion lies six minutes of spirited dirty-pop bliss. Girlfriends' sound has a true home on vinyl, and it's probably just as rad on cassette in your parents' 1988 Cutlass Ciera. Which means it might never find its way onto an officially released compact disc.

"I hope not," Potrykus said. "I think CDs are kinda boring."

Just like days off.
Posted by Michael Marotta at 1:00 PM