Hang the Label: Another Smiths comp on the way 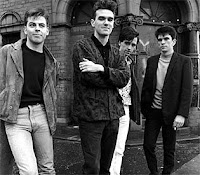 Make room on those dusty CD shelves for yet another Smiths 'best of', titled 'Hang the DJ,' set for release in November. For those scoring at home, this is the seventh Smiths compilation (if you include shit like 'Hatful of Hollow,' which I do). Not a bad haul for a band with just FOUR studio albums.

Naturally, Morrissey didn't sign off on it, and is pleading with folks to not buy the comp nor his "Live at the Hollywood Bowl" DVD. Said Mozzer about the Warner Bros.-released DVD:

“It is the work of cash-hounds, and I urge people not to buy it,” Moz said. “No royalties from this DVD will come to me. Please spend your money elsewhere.”

As he sang in "Paint a Vulgar Picture" way back when: "Reissue, repackage! Re-evaluate the songs, double-pack with a photograph."