I Love Money straight bringin it

So as I wonder what in the name of D.A.B. happened to Miss Rap Supreme and realize that MTV’s From G’s to Gents is really just Charm School with a different kind of boob convention, it’s exciting to see VH-1’s cash cow collective, I Love Money, really starting to uh, "Heat" up. 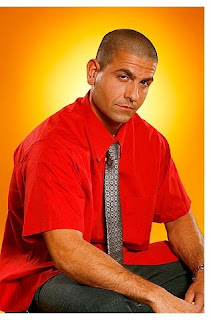 Episode 4 rolls tonight at 9pm, where the teams compete in some sort of chicken tossing competition, immediately putting Pumkin’s well-being in jeopardy. So far, we’ve said goodbye to Midget Mac (episode 1) because he didn’t want his stumpy ass to wear a thong, then Obi-Wan Ka-Nibblez (episode 2) got tossed American Gladiator-style by Mr. Boston on the high-rise bed thingy, despite her use of a "Jedi mind trick" (which didn't have any effect on Lee Motherfucking Marks).

And last week, the lesser of the Party Boys, Heat, was shown the door in an hour-long mental and physical beat down. Adding insult to infidelity, Heat was bounced by the world’s last remaining home boy, Frank the Entertainer, who not only stole Destiney his woman in what should eventually lead to more prime time toe sucking, but also had the final say in kicking his ass off the show. The Entertainer could have gotten rid of one of the Brothers Stallionaires, Real or Chance, or even Whiteboy, which would have helped his team in the long run, but he let poon rule the day and ghosted his competition with the womenz, not with $250,000. Will it come back to haunt the Gold Team? Yes, I think so.

In other noteworthy news: Lone remaining Party Boy, 12 Pack, is proving Alpha Dog status with the ladies, banging it up with both –large-in-charge Heather and conniving cunt all-star Megan. Tonight, Mr. Boston is about to get dirty with Real, Chance and Whiteboy, and it does not look good for Acton’s famous son. And for Rodeo, well, "I love rock, I love country. That's why I wear my hat, that's why kids love me." It still holds up.

Also, no one knows why Pumkin and Brandi C are still around. And I still can’t get that image of Toastee’s pasty ass beaver out of my head.
Posted by Michael Marotta at 5:07 PM