This photo ran about two years ago in Sports Illustrated. I forget the specifics, but the specifics take a back seat to the myriad levels of full-frontal awesome going on here. Take a look, absorb it all in, and we’ll recap after the break… 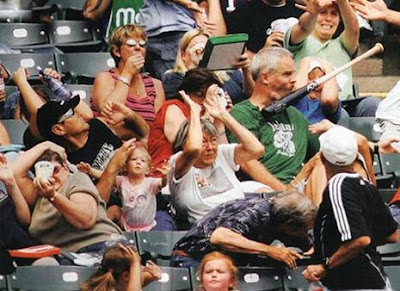 So much to get to. Ok, starting at the top, and rotating clockwise.

- Someone is wearing a throwback Dallas Mavericks jersey, though his permanent scowl has been cropped out.

- The woman in the upper right appears to be smiling, but clearly if trying to use the Force to prevent the bat from attacking.

- Now, the main attraction. Dude is just bitchslapped by this rouge Maple, and smacks him squarely in the jaw. His arms are nowhere to be found, so clearly someone wasn’t paying attention. Him throwing his jawline in the way did prevent the bat from ending that 9-year-old’s life, so good on ya, sport. Though any kid wearing a white towel on his head should get bat-smacked.

- The dude in the black Adidas shirt has a good eye, and was able to follow the bat as it tomahawked past him.

- The guy in blue is truly a master ducker.

- However, the girl under him is clearly so not impressed by this event. She’s just annoyed by it all and is eagerly awaiting the next pitch. Not a happy camper.

- The woman above is either praising Jesus she avoided the bat, or can’t help but Raise the Roof over this sudden entropy at the ballpark.

- But this little girl to her right is ENRAPTURED. She sees the End Times coming, and is preparing to be lifted by Jesus onto the great Polo Grounds playing field in the sky. What the Fuck City.

- To her right, lies presumably her father, who isn’t doing much to protect The Chosen One.

- Beneath him is a woman so adept at balancing her drink, so uses her right hand to protect the left side of her head. Texas Rangers, sign this one up!

- Moving along, we have the woman in the pink, who won’t let an errant bat get in the way of another mouthful of peanuts or popcorn.

- BONUS: You can’t see him in this cropped pic, but the bemused expression of the Ernie looking motherfucker (of Bert and Ernie) in the black shirt, upper right, is so God damn priceless. But it will remain unseen for the time being.
Posted by Michael Marotta at 11:42 AM