British indie-pop outfit Sing-Sing (starring guitarist Emma Anderson from Lush) have called it quits after two albums, the first of which, 2001’s “The Joy of Sing-Sing,” should have vaulted the sugar-pop gals onto mainstream radar. While they’re still the best band to be named after a correctional facility, I maintain that “Panda Eyes” is still one top tune, and it far outpaces anything Miki Berenyi has done in this crazy ol’ post-Lush world. I was constantly awaiting that Sing-Sing breakout single, but it never came. The official word from Emma and vocalist Lisa O’Neill:

"After 10 mostly very happy but sometimes very difficult years we have decided to 'call it a day' (i.e. end) with Sing-Sing. In 2006 Emma moved to Brighton, East Sussex where she is involved in music publicity and last year Lisa wed her long-term partner Run Wrake, moved to the Kent countryside and is enjoying her newly found freedom as a mum and freelance graphic designer. Even Mark van Hoen, our erstwhile producer, is moving to the USA later in 2008."

The notice ends with this teaser, no doubt worded to get the remaining handful of Lush fans all worked up:

"As for the future musically? Well, never say 'never'...... Emma has some plans regarding her next move so if you are interested in that then please stay on this mailing list as 2008 might have something very exciting in store." 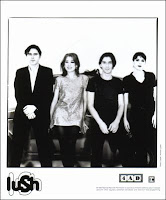 Very exciting, eh? Like exciting as in "Oh lovely, another indie record," or exciting as in "HOLY SHIT LUSH IS BACK TOGETHER?!?!" Time will tell, but if we’re getting new My Bloody Valentine material in 2008, how can a reformed Lush be far behind?
Posted by Michael Marotta at 1:08 PM