Band of the Month: Passion Pit 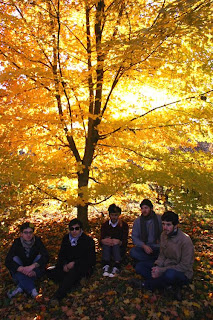 If you’ve stood near me for three seconds in the past few days, surely I’ve doused your monocle with spooge over Cambridge’s Passion Pit, some out-of-nowhere indie-synth dance shazz that I’ve had on steady repeat since Brenda at Great Scott schooled me last week.

It might just be my elevated state of mind, or the attachment “I’ve Got Your Number” has seemed to take towards a new ladyfriend (still <3 that chorus), but outside of that one dope MGMT song, I don’t think I’ve listened to anything else since Friday night. And, during last call at the pill, I may have drunkenly told everyone to go home and continue the dance party in their bedrooms while listening to the ‘Pit. It happens.

The sound can be described as anything from "Off the Wall"-era Michael Jackson to lo-fi synthpop to sparkling big beat party jams for hot summer days on the asphalt playground. Who the fuck knows, I hate describing things. Just listen to it, and you’ll see it doesn’t sound like anything else brewing here in frigid New England. Rumor has it the singer, the piercingly falsetto’d Michael Angelakos, wrote and recorded the entire EP in one night as a present to his girlfriend, restoring innocent hope throughout the jagged land.

Oh, and they’re live at the pill March 7, but I assure you I fell in love before I booked the show. They’re also at Great Scott next Saturday with the Basstown crew, so roll on that. It’s exciting times in the oh-eight, and now I have the soundtrack to it (No wonder I was listening to the Libertines to close out 2007, and now I’m all tripped out smiley-faced on this shim-sham of wonderment).
Posted by Michael Marotta at 1:58 PM