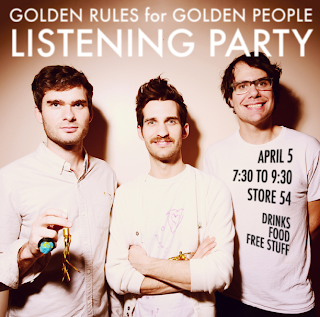 Today is Holden Lewis' birthday [editor's note: Oh shit!] so there's no better time to map out PRETTY & NICE's upcoming plans for new record Golden Rules For Golden People. It's the fast-action follow-up to last year's tireless Us You All We EP, and while that four-song effort was self-released, GR4GP gets the dual label treatment from Albany's Equal Vision Records and Rory Records, which was founded by Max Bremis of Say Anything.

While the new Pretty & Nice joint is not officially out until April 30, you can hear the whole thing next Friday, April 5, at Store 54 in Allston. That's where the band made sweet sonic love to everyone several months ago by releasing Us You All We and feeding everyone free Boloco burritos. It's good to be back.

With all that info in mind, here's Pretty & Nice's Plan of Attack:

* Saturday, April 20: Record Store Day 7-inch release for "Q_Q," limited to 500 copies of black vinyl off Equal Vision. There will also be a music video for this jam. "It will be artfully shot," says the band.

* Wednesday, May 1: Record release party at Great Scott in Allston with Kal Marks and Pattern Is Movement. More to come on this as the date approaches.

Aside from previously-released "Yonkers," the a-side to the Fantastic Artifact 7-inch, the rest of the 11-track album is all new material (though many of the songs have been in the band's recent live sets).

A few weeks ago down in SXSW, I jumped in the Pretty & Nice tour van and did a quick afternoon-drunk interview with the band, after they were done playing at the Basement on 6th and Congress. I had a few drinks already in me, and they had not only just finished another SXSW set, but completed shooting a music video for "Q_Q" at 13 different locations around Austin. So it's one big shitshow. Pardon my language.

Posted by Michael Marotta at 9:05 AM