Last night in Buffalo, the Florida Panthers' Richard Zednik was slashed in the throat by the errant skate blade of teammate Olli Jokinen. He's in stable condition in a Buffalo hospital, but as the photo below shows, this could have been deadly. 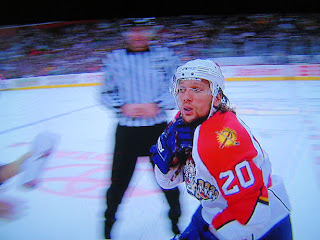 The whole ordeal was eerily reminiscent of the night almost 20 years ago when Clint Malarchuk has his throat slashed by a skate blade. That gruesome event also happened in Buffalo, and Malarchuk needed 300 stitches to close the gash in his neck. He missed I believe a few months, but played the final five minutes of the last regular-season game in Buffalo to show he was OK. Goalies would soon protect their necks. 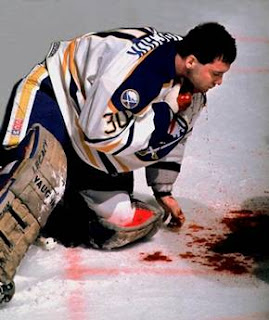 And because we're in the great U. S. of A., Malarchuk's semi-Daniel Pearl was commemorated through a Todd McFarlane action figure! Will Zedsy get the same treatment? Was Kyle McLaren behind all this? These are my Monday Morning burning questions... 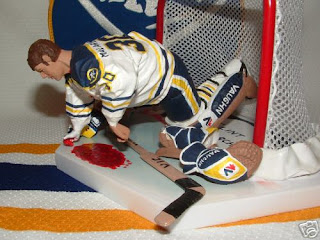 Posted by Michael Marotta at 7:35 AM