Follow-up -- URB has a response from Gaspar of Justice: "Yeah, shit happens! I remember the story, I couldn't remember the city but i think it was in Manchester. I didn't noticed at first, because as you can see I was looking at the computer to launch the next vocal hook and right after I realised that the blue screen went black, so there was no way possible it could work. So I plugged it back in, big deal! And the next thing you know is this picture."

Hey Justice, before you collect that five-figure show fee, ya might want to plug in all your gear, unless of course this is a new show from MTV's "Unplugged" series. And here I was offended at the Paradise when they walked onstage with pizza. OMG LOL Tech Funk Manifesto FTW. 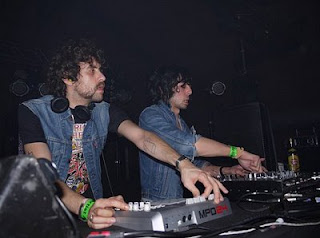 Posted by Michael Marotta at 9:12 AM