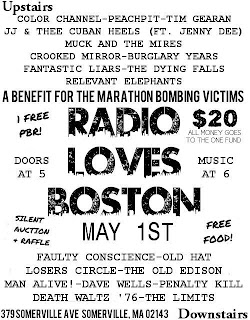 The good thing about a venue with two stages is that you can absolutely stack the lineup deck when necessity calls. Tonight in Somerville, Radio puts its two floors to great use tonight for the RADIO LOVES BOSTON benefit show to raise money for victims of last month's marathon bombings. The lineup is massive: from the dance grooves of COLOR CHANNEL to the sludgy rock of VUNDABAR -- who have a new record, Antics, fresh out of the Cambridge scene oven -- to the garage rock veteranship of MUCK & THE MIRES and JJ AND THEE CUBAN HEELS, which is Jen D'Angora performing Downbeat 5 tunes.

There's even my current favorite Boson band, BURGLARY YEARS, who might even whip out that My Bloody Valentime cover they sonically serenaded us with last Friday at the pill.

Indeed, there's something for everyone!

And true to form, there's also raffles, silent auction, and cash prizes. And shhhh, but Radio might sling a few PBRs your way for showing this kind of support on a Wednesday. Music starts at 6pm.

Full details over on the Facebook page, where 230 people have made the RSVP commitment. I'm sure they'll have the Bruins game on, too. After all, PENALTY KILL is playing.

Here's a taste of the tune-a-roos:

Posted by Michael Marotta at 10:50 AM